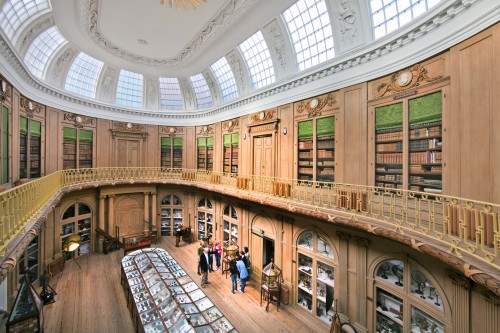 The oval room at the Teylers Museum in Haarlem.

Are you arriving a few days prior to the ball? Or are you staying a day or two afterwards? Here are some things to see and do while visiting The Netherlands:

Haarlem
Haarlem is a very old and historic city. There are many lovely streets with a lot of shops. In Haarlem there are two renowned museums. The Teylers museum is the oldest museum in The Netherlands (built in 1784). In the Frans Hals museum you can visit the current exhibition ‘Full of emotions; pain and pleasure in Dutch paintings of the Golden Age’. The two most popular Dutch sea towns Zandvoort and Bloemendaal and the beautiful coastline with its dunes are not far away from Haarlem.

The Hague
It takes only twenty minutes to travel from Haarlem to The Hague, the seat of the Dutch government. There are quite a few very interesting museums in the Hague. In the Mauritshuis, for example, you can admire many famous paintings from the Golden era, among which ‘The girl with the pearl earring’. In the Hague you can also see the work palace of the Dutch King (Noordeinde) and his future palace (Huis ten Bosch).

A real gem is the Panorama Mesdag. It is a cylindrical painting, more than 14 meters high and 120 meters in circumference. The vista of the sea, the dunes and Scheveningen village was painted by one of the most famous painters of the Hague School, Hendrik Willem Mesdag. It is the oldest 19th century panorama in the world.

Another interesting museum is the Gemeentemuseum Den Haag. For costume addicts this is the museum to visit. Their current exhibition is about 19th century fashion. On display are 19th century costumes from the museum’s own collection and some costumes used in films and series like Jane Eyre, Downton Abbey and Pride & Prejudice 1995, including Mr Darcy’s famous white shirt.

Amsterdam
The capital of the Netherlands is very close to Haarlem. Amsterdam is famous for its canals and is now an Unesco World Heritage site. The best way to see the Amsterdam is by canal tour during the day or in the evening, when the lights of the bridges give a romantic atmosphere to the boat trip.

The most famous museums in Amsterdam are The Rijksmuseum (just reopened last year), the Van Gogh museum, The Stedelijk museum (modern art) and the Hermitage. The current exhibition in the Hermitage is called Dining with the tsars and shows the porcelain and creamware services used during balls and banquets of the tsar’s court.

Another must see in Amsterdam is the Anne Frank house. If you would like to visit this house, make sure you buy an online ticket in advance to escape the queue outside.

we hope you enjoy your stay in The Netherlands! Need some advice on how to spend your time? Don’t hesitate to ask us!

This site uses Akismet to reduce spam. Learn how your comment data is processed.