An historic illusion by the sea 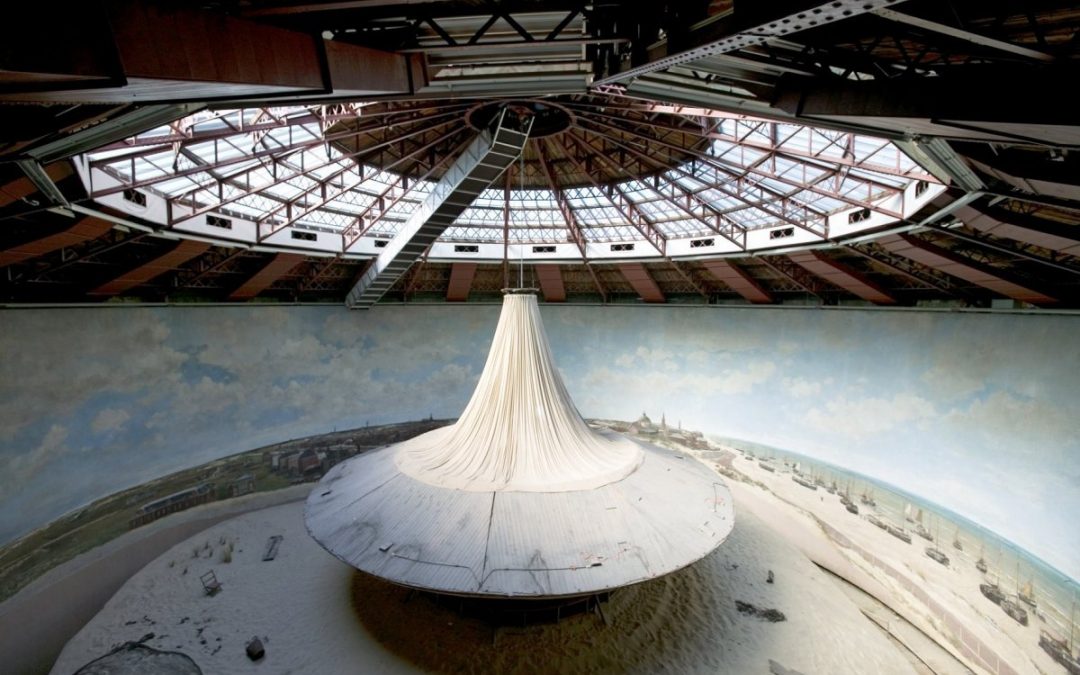 “I saw Mesdag’s Panorama… it made me think of what Burger, or was it Thóre, said about Rembrandt’s ‘Anatomy Lesson’: The only flaw that the painting has is its flawlessness.”
Vincent van Gogh, 26 August 1881

The weekend program of our Historic Ball at the Sea opens with a visit to the Panorama Mesdag. This artwork is a rare, surviving example of an entertainment experience that was enormously popular in the Regency era. When you enter the Panorama Mesdag, you step into a real – as well as a ‘virtual’ – time capsule.

Age of showmanship and spectacle

In the early 19th century, there was a flourishing fashion for enormous paintings, and artists in this age of showmanship and spectacle competed to make an impression. The appetite for visual extravaganza reached its peak in the form of the ‘panorama’. These massive circular paintings captivated late Georgian and Regency society, and remained popular well into the Victorian age.

The word “panorama” (Greek for pan (“all”) horama (“view”) was first coined in 1792 by the Irish painter Robert Barker to describe the enormous, 360-degree paintings he made of Edinburgh. His “interesting and novel” views of the city were first displayed in a makeshift wooden rotunda in his back garden. They proved so successful that in 1793, Barker was able to move his paintings to the first building in the world – located in London’s Leicester Square – purposely designed to showcase panorama paintings. 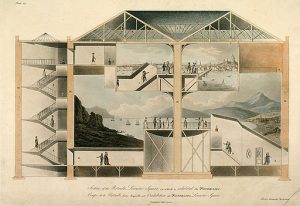 Cross-section of panorama displays in the Leicester Square Rotunda (1801)

Barker’s London attraction was a stupendous hit. It made him a fortune and launched an international craze for panoramas. Within just a few years, many artists were producing them and most major European cities had more than one purpose-built location to host them. The Museum of London – just one, single venue – exhibited more than 125 different panoramas between 1793 and 1863.

The Duke of Wellington, I presume?

The first panoramic scenes depicted urban settings and landscapes. After the Napoleonic Wars, military and historic subjects became the rage. In the 1820s and 1830s – when the battlefield panoramas were in full swing – war veterans would be on hand to offer guided tours at London’s numerous panorama venues. One of them, the imposing Regent’s Park Colosseum, featured the city’s first hydraulic lift to bring people up to the viewing gallery. An enthusiastic visitor to these spectacles was the Duke of Wellington, who would often relive his victories together with visitors.

The fascination with panoramas lasted quite some time. Their popularity only began to decline in the last part of the 19th century. But once the trend was past, preservation of the huge canvasses proved to be inconvenient and expensive. Only a few survived intact and are still on display in the 21st century. One of these is the Panorama Mesdag. More than 14 metres high and 120 metres in circumference, it is the largest panoramic painting in Europe. It is also the oldest panorama in the world that is still in its original, purpose-built location.

Hendrik Mesdag was a notable marine artist of the Hague School. He painted his panorama between 1880-1881 with the assistance of his wife, the artist Sientje Mesdag-van Houten, and a number of apprentices. The illusion they created places the viewer on top of a high sand dune, overlooking the sea, beaches and village of Scheveningen in the late 19th century. Den Haag can be seen in the distance. The Panorama Mesdag was recently restored, and is as fresh and vibrant today as when it was painted. The detail is astonishing (it’s worthwhile to bring binoculars) and adds to the artwork’s three-dimensional quality.

There are still a limited number of tickets available for the Panorama Mesdag tour. It includes a personal guide who will provide interesting information and a behind-the-scenes look in restricted areas to reveal the secrets of how the unique illusion is created.
Saturday, 8 June – 10:30-11:30
Price is €7.50 with a Dutch Museumkaart, and €15 without.
You can order your tickets here.

This site uses Akismet to reduce spam. Learn how your comment data is processed.